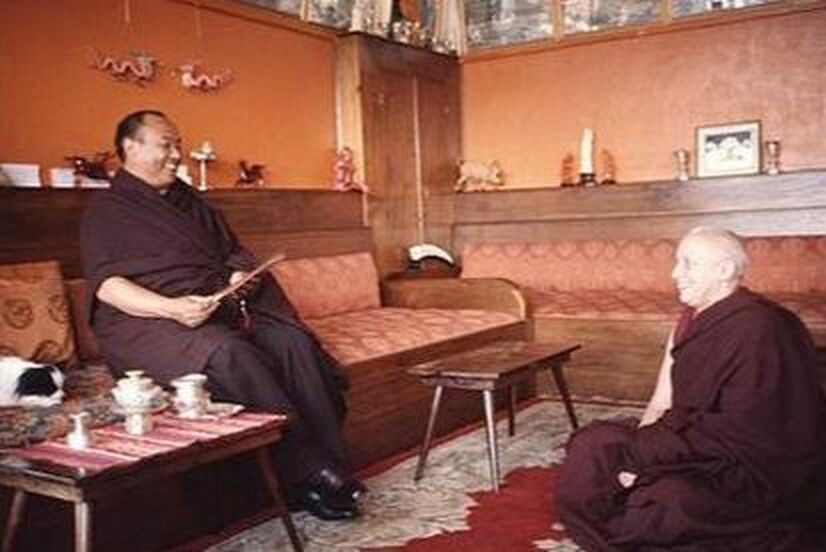 The First Western Spiritual Seekers Meet the Karmapa
Not much time had passed since Karmapa had left his homeland, and he was also not yet completely settled in Sikkim when he began meeting his first Europeans and Americans. Motivated by a personal quest for a meaningful life, they had come to the East to learn from the wisdom of Asian spiritual traditions.[1] One could think that Karmapa did not have much in common with them, but rather than leading to a clash of cultures or a mutual misunderstanding, these encounters were fruitful exchanges from the very beginning, an extraordinary relationship . Their association with few responsive Westerners“, as Keith Dowman writes, grew “into a worldwide fellowship.”[2]
Many Westerners were deeply touched by Karmapa, even when seeing him only briefly. They were so deeply touched that the course of their lives changed. The encounters were direct and without formal barriers. Karmapa often invited his guests to simply spend some time in his quarters. He embraced them. Lama Namgyal, the first French Kagyü monk recalls that “he was very tactile.” Another early visitor remembers, “We just went with him through his monastery or just sat with him in his living or even sleeping quarters.” Yet again another student said, “Through this immediacy it became a complete one-to-one situation.”
His absolute unreserved nature impressed the Western guests as well. According to Lama Ole Nydahl, “Much to our surprise Karmapa and his lamas were in no way stiff or ceremonial during the rituals. While everything was going on they chatted, joked and laughed, looked around, yawned, until a moment came when they were all very concentrated.”[3] This genuineness convinced the Westerners, opened them up and “won them over” to Buddhism, just by “doing without doing.” For these meetings no complicated protocol had to be followed, which would have created a barrier. At the same time a seed was planted and a cornerstone laid for spreading the Dharma in the West. Many of those early visitors later worked with untiring engagement to establish the Dharma in their countries. It was an incredible time of awakening.

Freda Bedi–Sister Kechok Palmo
The British woman Freda Bedi came to India in the 1930s. Supporting Mahatma Gandhi in his struggle for Indian independence, she had even briefly been jailed. She was already trained in meditation. When she visited a diplomat friend in Gangtok, he said she could not possibly leave Sikkim without being introduced to the Karmapa. The following encounter is typical of many of Karmapa’s meetings with people from the West because it changed her radically. Her friend sent her on horseback the twenty miles up to the monastery. Halfway, in the traditional Tibetan manner, a servant of the Karmapa welcomed her with butter tea and biscuits. Bedi remembers, “We rode along the most enchanting path, through a forest by a stream, until we came to the monastery.”
Upon arriving at Rumtek, Bedi was led to the Karmapa’s quarters. “With warmth and compassion,” he greeted her. She knew immediately that this Tibetan yogī was her guru. She had wandered so long and had now “arrived home.”[4]
Karmapa was surrounded by many singing birds in cages. He and Bedi spoke about refugee matters and then the conversation turned to meditation. Bedi said she felt attracted by the mantra practice using beads, but wondered how she could keep the awareness meditation she had learned in her Burmese teacher’s Vipassana tradition, “because in mindfulness you have to give away all concepts and all ideas and just sit.” Karmapa manifested his special quality of giving everybody the perfect answer fitting to their background and said: “Oh, just be mindful of the beads,” an answer that Bedi found one hundred percent satisfactory.
The following event is what radically changed her life:
As I got ready to leave, he stood up and manifested himself to me as the Buddha. He stood in the corner of the room with one hand raised in blessing like you see in the exquisite Gandhara Buddha sculptures. He did it quite naturally. From then on, he was in my heart as the special one. It just happened and how strange it was too.[5]
Sheila Fugard, a close disciple of Bedi, writes: “The Karmapa had recognized a relationship with her over lifetimes.” Karmapa told her that the connection came from former lives. “He immediately accepted her as a personal pupil, initiated her and prepared her for the tantric path.”[6]

© From: Gerd Bausch: Radiant Compassion. The Life of the 16th Gyalwa Karmapa, www.edition-karuna.de. Please feel free to share the extract, under condition that you mention the source and the weblink. Many thanks!

[5]Bedi in an interview on the program New Dimensions conducted by Will Noffke for KQED-FM in San Francisco, cit. in: Andrew Whitehead: Border Crossings. The Political, Spiritual and Personal Journeys of Freda Bedi, Delhi: Speaking Tiger, forthcoming.