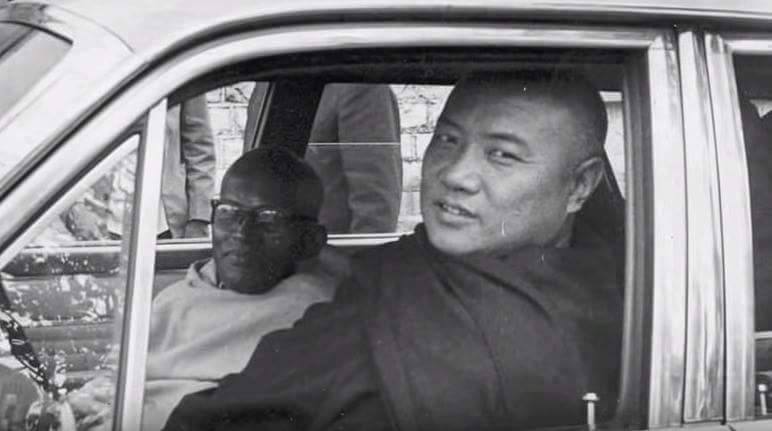 Extracts from Volume One, Chapter Two--Beginning Anew in Exile

Travel to Nepal, Bhutan and India
In the spring of 1961, Karmapa visited Nepal. Here as well refugees lived in extremely poor conditions and were suffering from the unfamiliar climate. Yishin Norbu did what he could to relieve their distress. Beru Khyentse Rinpoche:
"Karmapa escaped from Tibet to Bhutan and came later to Nepal, where we met again in Bodhnath (Kathmandu). I was twelve years old at that time. There were many Tibetans, we were very sick as Tibet is very high and cold, and the food is different. Many people died. I almost died also. Karmapa gave me some medicine and so thanks to him I recovered. About fifteen people of our group (of one hundred) died within two months."[1]
At the Bodhnath Stupa the Karmapa showed the Black Crown to a huge crowd. The participants included many Tibetan refugees, for whom it was a great consolation to meet him once more after all the hardships of their flight and with the difficult life in exile. Wherever Karmapa went in Nepal, the population received him warmly. Thanks to his previous visits, he was already well known throughout all groups and classes of society, and even the royal family welcomed him again.
In India, Yishin Norbu’s next destination, the situation was different. Karma Dorje, an artisan who devoted his life to the artistic decoration of Karmapa’s new seat, remembers well the travel through the Indian subcontinent which the Karmapa undertook with some residents of Rumtek:
"At that time everybody was extremely poor. The whole of India was quite underdeveloped then. Karmapa travelled in a big bus where he sat in the front and the rest of us in the back. About fifty of us were tulkus. The four eminent Rinpoches were there—Shamar, Situ, Jamgön Kongtrül and Gyaltsab—and many other Rinpoches. Karmapa liked humor a lot so some made jokes and some sang Khampa songs. The journey was so nice with Karmapa in front laughing and joking. We had a wonderful time. As I said India was not developed then.
Bodhgayā at that time was a remote village. Karmapa lived in a very small guest house and all the others lived around him in tents. The Indians, who had never seen Tibetans before, found them very amusing; they were very surprised by their appearance, clothes and everything. Many came out of curiosity, but when they met the Karmapa, they behaved very differently. They immediately felt something and automatically were respectful, finding something unique in him. When people saw him they changed. He did not have to say a word, and that happened in Bodhgaya as well.
When we later stayed in Delhi, Karmapa again lodged only in a small guest house and we lived nearby. We stayed about ten days in Delhi. In the evening we all recited the Karmapa mantra Karmapa khyenno![2] The Indians used to come and to listen and then, surprisingly, a lot of the Indian children also started to recite the mantra. For them it was interesting to come and see Karmapa. The mantra drew them towards him.
In Nepal people were quite aware of who the Karmapa was, so when they knew he was there, they came along to receive a blessing and were very respectful, but in India it was a new experience and it was even more amazing to see the huge effect he had on people.
Next, we travelled to Bhutan. The visit was very successful and the whole group (all of Rumtek) was there, including us. We spent a lot of time in Bhutan. The king was very generous. At that time, we had no contact with the Western world and no help from any other part of the world. After that the Karmapa was able to start building the monastery."[3]

© From: Gerd Bausch: Radiant Compassion. The Life of the 16th Gyalwa Karmapa, www.edition-karuna.de. Please feel free to share the link, but ask info [at] karmapabiographie.de for permission for further uses. Thanks a lot!


[1]      Interview with Beru Khyentse Rinpoche, Möhra, 2012.
[2]      For more about Karmapa’s mantra see the corresponding chapter in Vol. II.
[3]      Interview with Karma Dordje/Tsültrim Passang, Rumtek, 2011. Many thanks to Yeshe Jungne for the English translation.