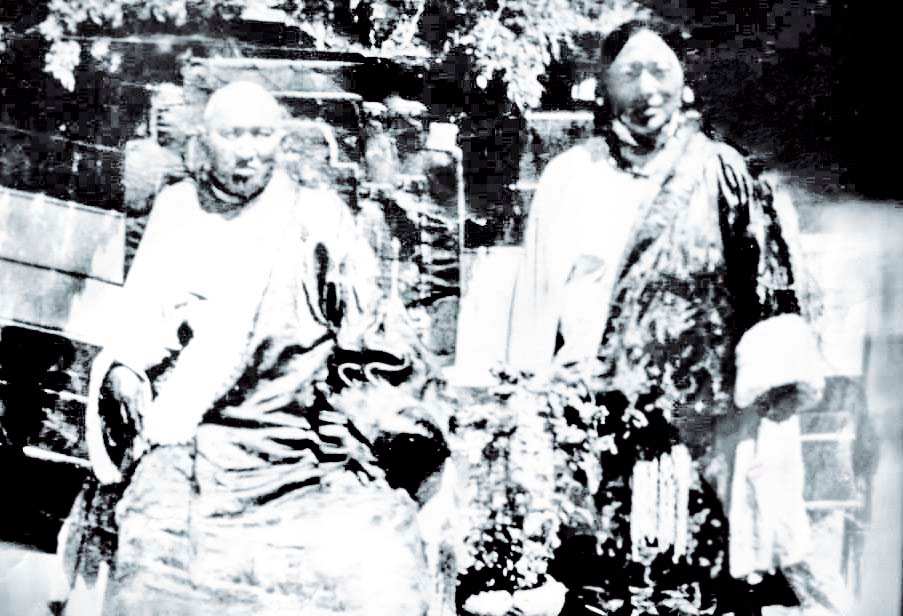 Extract from:
Radiant Compassion
Glimpses of the life and sctivity of the 16th Gyalwa Karmapa

Chapter 1
The Birth of a Buddha

In 1923, less than two years after the parinirvāṇa of the 15th Gyalwa Karmapa Khakhyab Dorje, the abbot of Dzogchen monastery, Thubden Chökyi Rinpoche, visited a couple who were highly regarded throughout all of Derge province in eastern Tibet. The husband, Päljor Tsewang Norbu, himself a Lama, was a minister in the King of Derge’s cabinet and his wife Kalzang Chödän was considered a worldly dākinī.*[1] Dzogchen Rinpoche was the couple’s root lama,* and when he arrived at their stately dwelling in Denkhok, they welcomed him with full honors and the highest Tibetan etiquette.
After he had been entertained and worldly and spiritual advice were requested, Dzogchen Rinpoche astonished the couple by announcing that they would soon be the parents of a great bodhisattva.* Shortly after the abbot’s visit, they joyfully discovered that Kalzang Chödän was indeed pregnant. The pregnancy went smoothly and, as happens with many mothers who are carrying highly realized masters, wondrous occurrences transpired. People recount to this day that even while in his mother’s womb the child recited “Om Mani Peme Hung,” the popular mantra of Avalokiteśvara. Kalzang Chödän had remarkable dreams, in one of which she saw the Black Crown of the Karmapas.[2] The couple began to anticipate who the “great bodhisattva” that Dzogchen Rinpoche had predicted might be.
Since he was such a remarkable child, Dzogchen Rinpoche advised Kalzang Chödän to go into retreat during her pregnancy and to give birth not in the Athub palace but in a cave of Padmasambhava, the Lion’s Sky Castle, which was not far away. Padmasambhava* had practiced there in the 8th century, profoundly blessing the place. Thus, as the birth approached, Kalzang Chödän and Päljor Tsewang built a large tent in the flower meadow in front of the holy cave.[3]
Nature itself reflected the imminent birth of an extraordinary being. Villagers saw a multitude of rainbows and spectacular cloud formations. The night before the birth, the richly decorated tent filled with light. Even now people say that ritual instruments and voices chanting in different languages were heard, although no one was seen conducting rituals. Tibetans believe there are beings which most of us cannot perceive and that these are not just mythical creatures. Buddhist teachings recognize and describe many other kinds of living beings besides humans and animals. For those witnessing the event, it was evident that the sounds came from Dharma protectors* who were attending the great bodhisattva’s birth and making prayers.[4]
The important aristocratic Athub family of Karmapa had a hundred attendants who were all present on this auspicious occasion, when legend tells us that even more extraordinary incidents ensued. On the eve of the birth, the unborn child disappeared from his mother’s belly, naturally causing concern. At sunrise the following morning, however, her belly was again swollen—her son had returned. (Various lamas later explained that the bodhisattva had visited the Pure Lands.*) The mother, herself a dākinī, had a vision of a “black being” which she identified as the Dharma protector Mahākāla Bernagchen,* the main protector of the Karma Kagyü school.
At dusk on the full moon day of the sixth month of the year of the male wood mouse[5], according to the Tibetan calendar#,  the 16th Gyalwa Karmapa Rangjung Rigpe Dorje was born, the event being accompanied by numerous auspicious signs said to be# typical for the birth of a great master. Rainbows appeared in the blue sky; soft rain showered down, and some saw a rain of flowers; the earth trembled softly and the water in the tent’s offering bowls turned into milk. Neither the pregnancy nor the birth itself had caused the mother any pain. Legend has it that, like many of his previous incarnations, Karmapa walked seven steps in every direction. Proclaiming “Mother, I will not stay,” he announced his fearless character, that of a great bodhisattva.[6]


[1]       Very early in her life it became clear that she was special. When her parents took their baby to the great Nyingma master Trom Drubtop Gyalwa Jangchub for a blessing, the highly realized yogi blessed the other people present by putting the infant on their heads. Lama Tsültrim Namgyal: Im Dienste zweier Karmapas – Erinnerungen von Gyamkhar Tsültrim Namgyal, Teil 1-3. Buddhismus Heute, Nr. 60, 2019.

[2]       The significance of the Black Crown is explained in the introduction and the corresponding chapter in Vol. II.

[4]       Such non-humans can be beings of conditioned existence, which are not visible to our eyes, as well as Buddhas, bodhisattvas, yidams* and protectors in their Sambhogakāya*-form.

[5]       Tibetan biographies of the Kagyü tradition say it was the full moon day of the sixth month. There are two different Tibetan calendars, which place New Year sometimes a month apart. According to the Tsurphu calendar, which goes back to the second Karmapa Karma Pakśi, this would be the 16th of July 1924. But according to the Phugpa calendar, which was the one most commonly used in Tibet and which Karma Trinlay Rinpoche believes is most probably the one the dating follows, it would be the 14th of August.

[6]       Since in the Mahāpadānasutta it is said that at birth Buddha took seven steps, this legend suggests that with Karmapa a living Buddha was born.