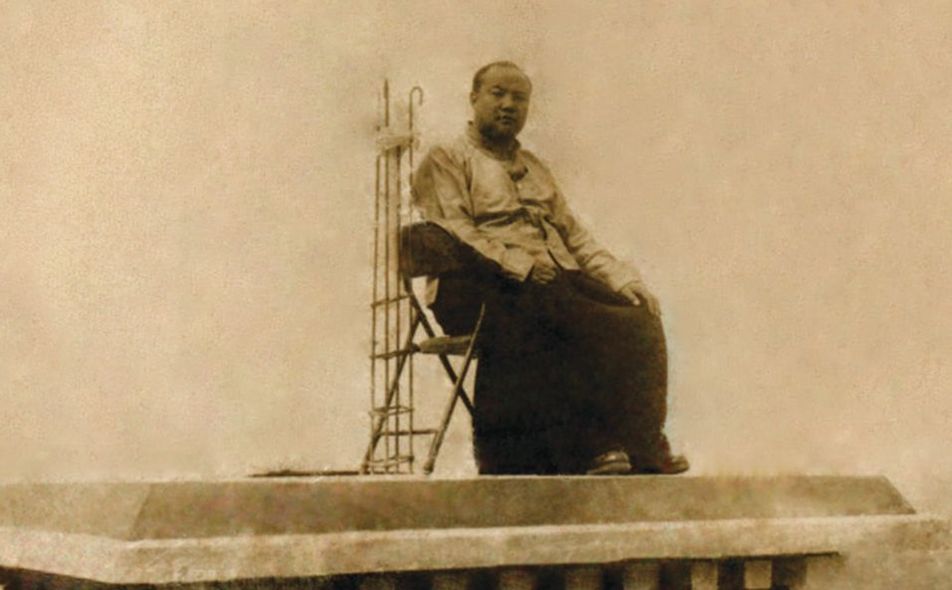 During the Construction of the Rumtek Monastery
Before beginning construction, Karmapa blessed the ground of the new monastery by practicing the yidam* Cakrasaṃvara (Khorlo Demchok) for one week. On January 17, 1963, the groundbreaking for the monastery started. Huge masses of earth needed to be moved in the hilly surroundings. Monks and laypeople promised to finish the task as quickly as they could and worked ten hours a day, regardless of the weather—terribly hot or freezing cold.
Lama Tönsang remembers:
"Karmapa said we first had to cut the trees and prepare the foundation. We worked the earth to prepare platforms and the basis. We were a team of forty to eighty people to achieve that task.
We had to dig huge amounts of earth and rock from the mountain to create a flat horizontal platform for a five-story building. At that time we were working only with our bare hands because there were no machines. Only from time to time we used some explosives to get the hole completed.
Once Karmapa sent a monk to warn us of a danger: the earth and rocks could slide. So, we chose an observer who would watch to see if there was a landslide or rocks and earth falling down. He was watching while we continued working. At one point some earth did slide. It wasn’t much, but enough to bury somebody. We ran away and checked to see if somebody might be missing. We could not find one monk, Tenzin Gyurme,[1] who was just beside us before. We removed the earth very quickly and carefully, taking care not to hit his head. Together we cleared away the earth and discovered something red. He was buried! We were able to get him out and he just recited very weakly “Karmapa Khyenno.”[2] He was completely alright with nothing broken. After one week he was up and about again."
© From: Gerd Bausch: Radiant Compassion. The Life of the 16th Gyalwa Karmapa, www.edition-karuna.de. Please feel free to share the extract, but give the source and the weblink. Many thanks!

[1]      Tenzin Gyurme later became Karmapa’s representative in the United States.
[2]      A mantra which invokes the activity and blessing of the Karmapa (See chapter on this subject in Volume 2).