From the chapter:
The Black Crown of the Karmapas--
Liberation Through Seeing

There were no coughs, no whispers, and even the ushers seemed to float noiselessly in the aisles. Several hundred people sat motionless, their hands folded neatly in their laps. Before them, the stage of Lisner Auditorium had been transformed into what resembled an Eastern religious shrine. Eight golden banners, a row of yellow chrysanthemums, orange pillows, rugs and a deep blue backdrop framed a splendid throne covered in an ornate brocade material. The stage was set, quite literally, for the Ceremony of the Vajra Crown, (which was) a thing of strange yet compelling beauty.
Harry Sumrall[1] 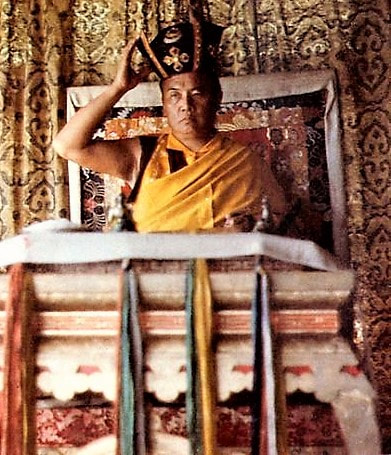 Whether he showed it during his travels or in his monasteries in Tsurphu and Rumtek, nothing else the Karmapa did reached, touched, and changed as many people as did the Black Crown Ceremony. Of course, it was not simply the crown that affected people so profoundly—however much various Karmapas had blessed it over the centuries—but also the deep meditative absorption in which the Karmapas connected with the blessing power of Avalokiteśvara,[2] the Bodhisattva of Great Compassion, whose emanation His Holiness famously is.
The crown’s origin
Buddhist cosmology divides large time spans into so-called major kalpas or eons. These, in turn, are comprised of a thousand minor kalpas, in each of which a Buddha manifests perfect enlightenment. In our present fourth kalpa, this is Buddha Śākyamuni. According to Buddhist teaching, a previous incarnation of Karmapa called Vajra-like Sage lived during the time of Dīpamkāra, the second Buddha. In that time, the lifespan of the earth’s inhabitants is said to have been far longer than it is now, and so he spent thousands of years meditating in a cave where, as the beginning of Volume One explains, he finally actualized vajra-like samādhi. According to legend, 100,000 dākinīs witnessed this event and were so deeply touched that they wove from their hair a black crown and handed it to the yogi as a confirmation that from now on he would manifest the activity of all Buddhas.
Two minor kalpas later, while doing retreat at Gampo Nenang in 1160, when he attained the highest realization, the First Karmapa Düsum Khyenpa (1110-1193) had a vision of the Mahāsiddha Saraha wearing a black hat. Karmapa later fashioned a facsimile of it, which became known as the le shu, the Action Crown, or Small Black Crown.[3] A quarter of a millenium after this, the Chinese emperor Yongle invited the Fifth Karmapa Deshin Shegpa (1384-1415) to his court in Nanjing, the Ming Dynasty capital. There, over a period of almost three weeks, Deshin Shegpa performed a miracle in front of the emperor every day. Deeply impressed, the emperor commissioned an artist to paint pictures of these events, which were commented upon in Tibetan, Mongolian, Chinese (Mandarin), Uighur, and Arabic.[4]
But the Chinese emperor did not only witness these miracles: after several days of the 5th Karmapa teaching and bestowing transmissions, the Yongle declared: “Whenever you perform a blessing ceremony, you always appear to me in a special way. Your body takes the form of Vajradhara and you are wearing a kind of black turban or crown on your head!” Karmapa responded that it could be that when a great bodhisattva teaches in human or nirmāṇakāya form, the body can also simultaneously manifest in saṃbhogakāya* form and that the emperor was experiencing this form.[5] Furthermore, the emperor had seen the Naturally Appearing Wisdom Crown (Tib. yeshe rangnang gi chöpen), which normally can be seen only by those who are sufficiently advanced to perceive the saṃbhogakāya. Convinced that others would greatly benefit if the “karmically less fortunate” could see it, the Emperor asked Karmapa to permit him to have the crown replicated, because he wished to add ornaments, like a red ruby.
From his 8th to his 16th incarnations, each Karmapa showed the Black Crown, also called the Vajra Mukut, accompanied by a ritual. It became his symbol. The 16th Karmapa, who rarely taught extensively on his travels, used this fairly short ceremony as an excellent vehicle through which—in these busy times—to enable those present to experience the potential of their basic goodness, the Buddha nature.[6]

The benefits of seeing the Black Crown
Many masters have praised the Black Crown. Padmasambhava* taught that if “any person sees” a crown like that of the Karmapas, he is “saved from the unfortunate conditions of samsara and will, as a result, attain the rank of a wisdom holder, seeing with wide open eyes the Noble Chenrezig (Avalokiteśvara) and obtaining qualities and merit equal to his.”[7]
Some traditional texts state that simply seeing Karmapa is sufficient to be freed from a rebirth in lower realms.* However, as described in the chapter How Karmapa helped after death, he can only act within the limits of the karmically possible. What one experiences during the Crown Ceremony is also, as Topga Rinpoche wrote, “according to the awareness of each individual. To come into contact with this crown which bestows deliverance on sight gives rise to different perceptions.” Tenga Rinpoche confirmed this statement: “Some recognized the nature of mind during the Black Crown ceremony, and others saw a kind of white light on top of the Black Crown.”[8]
Everyone experiences the ceremony a little differently, and likewise everyone has difficulty putting it into words, because what happened is beyond the describable. Some perceived that the “energy” in the room “was condensed.”[9] For many, conceptual thoughts subsided and they discovered a deep inner peace along with feelings of warmth and basic love that they had never known before.
Others saw Karmapa or even the whole material world around him literally dissolve, as Lama Ole Nydahl describes it: “Sometimes during the ceremonies, everything would explode in golden-yellow lights, and only the Crown remained clearly visible. At other times, an energy moved up through the center of my body, so strong that I nearly fainted and was dazed for hours.”[10] Wolfgang Neugebauer describes something similar:
Throughout the ceremony, a current passed through my body, a constant chill, and finally my lips began to tremble. I became fuzzy, and felt sensations in the heart and forehead chakras.[11]
The experience also changed for individuals, as Lama Ole relates:
The more we were charged and purified by being near him, the more the effect of the Crown Ceremonies changed. First, it was a feeling of power, something physical, like being hit by lightning. I was very strongly shaken, and we were both left in a blasted but totally fulfilled state. Gradually, however, the shock-like experiences became more flowing, limitless and enduring. Every ceremony brought new visits to states beyond time and space; sharing in Karmapa’s mind was just an endless ocean.[12]
Sometimes, participants in the ceremony felt nothing or very little. However, many of these people years or decades later often found their way to Buddhism and in retrospect claim that Karmapa and the ceremony had “done something with them.”[13] In traditional Buddhist terminology, as we saw earlier, this is called “planting a seed,” which great masters like Karmapa insert into people’s “mind streams.” Sooner or later they will “ripen.” Lama Dudjom Dorjee’s account of a Crown Ceremony which the Karmapa gave in a Delhi refugee camp in the 1960s illustrates this:
Many of us were dirt-covered beggars without even a notion of where our next meal would come from, but in the glow of H.H. the Karmapa’s compassionate and luminous presence, we all seemed to shine with the radiant hope and optimism of kings and queens. I believe in that moment a seed, or aspiration was planted in me that I too would one day work for the benefit of other beings.[14]

[2]               Hopefully we can soon say “connects” again, as the Black Crown is currently locked up under seal in Rumtek until the question of the 16th Karmapa’s succession is clarified, through a process which seems to be moving forward now.

[6]       Aside from the small black crown (see Vol. 1), Karmapa had another large Black Crown, called Meaningful to Behold (thongwa döndän), which the king of Yunnan might have offered when he granted the Tenth Karmapa refuge. The 16th Karmapa left it in Tsurphu and it was lost due to the Chinese occupation and destruction.
The earliest historical confirmed Black Crown ceremonies are those of the 8th Karmapa, Mikyö Dorje (1507-1554). Karmapa Orgyen Trinley Dorje: Four Session Guru Yoga, Session One, February 11, 2017, Mönlam Pavilion, Bodhgaya.

[7]       All citations of Topga Rinpoche from: The Explanation of the Precious Crown which Liberates on Sight, Also Called: The Vessel of the Two Accumulations, Karmapa Translation Committee, Dhagpo Kundreul Ling 1999.

[10]      Nydahl, Lama Ole: Entering the Diamond Way, op. cit., p. 75. Nydahl adds that “a shock-like reaction is no better than the more flowing one that most people have. One should never expect any fixed thing when energy is transferred. That effectively blocks the mind. Know instead that whichever way it manifests is right. Even no direct experience is okay. The impressions are still planted and the results always come, sooner or later.” Nydahl: Die Buddhas vom Dach der Welt, Aurum 2004. p. 79.