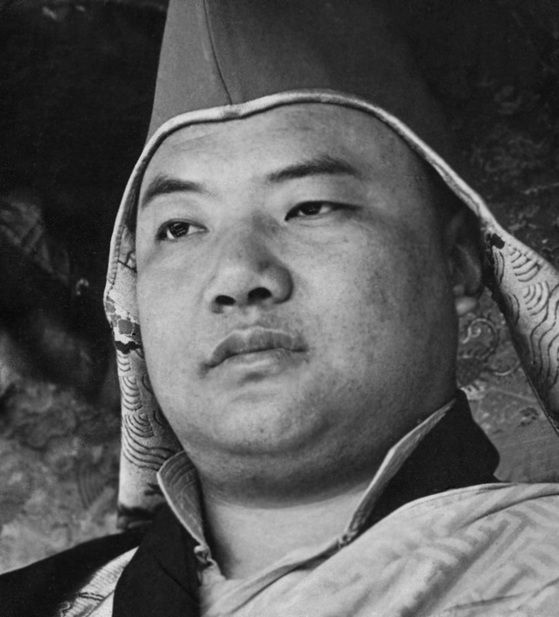 But only now am I beginning to appreciate that the Buddhist teachings need not be verbal or philosophical. In those early days I was too young to grasp that fully. Now I see that the simple presence of the 16th Karmapa, the Buddhas and the great masters, is enough to transmit the essence of the Buddhadharma. Many others who saw the 16th Karmapa share this view, including in the west, where in those days the Dharma was just beginning to be heard. Even the most intellectually stubborn academics and egomaniacs from different universities, without receiving any teachings, would feel something inside them change and open up when they saw His Holiness the Karmapa.
Khenpos, intellectuals, scholars, and people like me try to teach so much over so many years. Maybe all our logic and explanation will convince one person the very morning of a teaching, but even then whatever you learn is gone the moment you leave the classroom. Nothing remains. But if you walk into the presence of someone like H.H. Karmapa, he does something to you that will remain with you much longer than all our ‘verbal diarrhea’.
It is really the presence and being of the Buddhas and bodhisattvas that matters most. Because of who they are and how they exist they actually needn’t do much. Their mode of manifestation is living proof of the Dharma. This is particularly important at times like these when wrong views are so prevalent. Wrong views are very difficult, if not impossible, to defeat by logic alone. On the contrary, the better your logic, the more likely that you end up with a wrong view, something you become even sharper at promoting. The physical presence of someone like H.H. the 16th Gyalwa Karmapa is actually the best evidence of the right view, and gives us the greatest inspiration. Therefore, I’m very happy about this new book describing His Holiness’ life.


From the introduction
Head of one of the largest schools of Tibetan – or in modern terms Himalayan – Buddhism, the 16th Gyalwa Karmapa was completely free, approaching everybody and everything completely impartially. His actions were quite naturally steeped in deep compassion. For him enlightenment was not a theory; he manifested wisdom and compassion spontaneously in every single moment of his life. At the same time, he seemed to overcome all cultural barriers naturally and without any effort. Despite his upbringing in the completely traditional culture of a Tibet that was in many ways still medieval, during his travels he inspired people who had grown up in a totally different world. Whoever they were, be they hippies, senior politicians – such as a former Prime Minister of France – or others who had found their way to him ‘only by chance,’ they changed in the presence of the 16th Karmapa: People opened up and were spontaneously ‘infected’ by his boundless joy. Quite naturally he brought them into contact with their positive potential, and motivated them to act in a wholesome manner, both in terms of spirituality as well as in their dedication to helping others. He brought not the slightest moral pressure to bear on others – no feelings of guilt – and did not expect people to blindly adopt any Buddhist dogmas. Karmapa touched people of all religions and spiritual traditions who were interested in spiritual transformation, even those who emphatically refused everything religious. Individuals lucky enough to meet or to see him – even in the presence of thousands of spectators – felt spontaneously accepted, their neuroses as well as their good qualities. 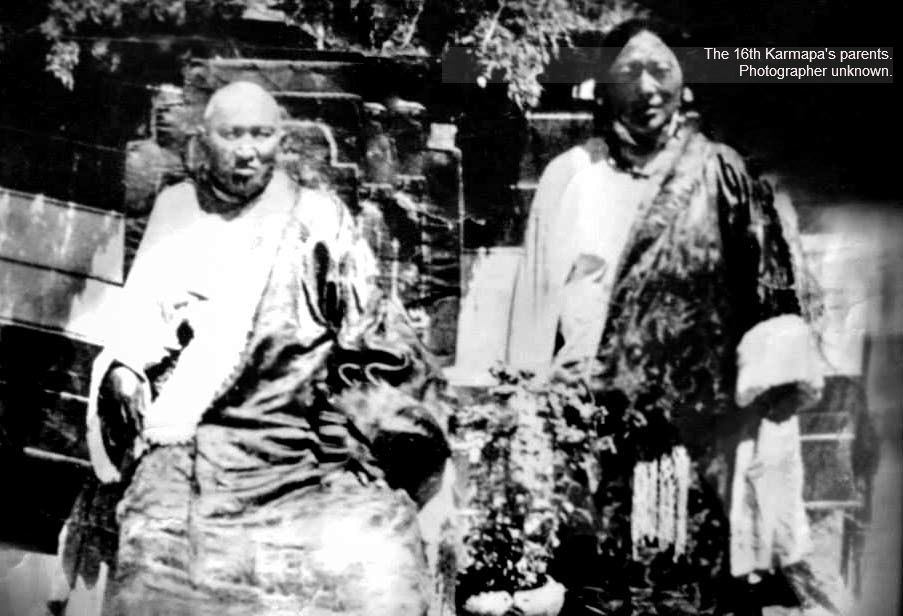 From Chapter One
The Birth of a Buddha

In 1923, not even two years after the parinirvāṇa of the 15th Gyalwa Karmapa Khakhyab Dorje, the abbot of Dzogchen monastery, Rinpoche Tsewang Norbu, visited a couple who were highly regarded throughout all of Derge province in eastern Tibet. Päldjor Tsewang Norbu, himself a Lama, was a minister in the King of Derge’s cabinet and his wife Kaltsang Chödän was considered a worldly dākinī.* Dzogchen Rinpoche was the couple’s root lama,* and when he arrived at their lordly dwelling in Denkhok, they welcomed him with full honors and the highest Tibetan etiquette.
After he was entertained and worldly and spiritual advice were requested, Dzogchen Rinpoche astonished the couple by announcing that they would soon be the parents of a great bodhisattva.* Shortly following the abbot’s visit, they noticed joyfully that Kaltsang Chödän was indeed pregnant. The pregnancy went smoothly and as happens with many mothers who are carrying highly realized masters, wondrous occurrences transpired. People recount to this day that already in his mother’s womb the son recited ‘Om Mani Peme Hung,’ the popular
mantra of Avalokiteśvara. Kaltsang Chödän had remarkable dreams, one of which she saw the Black Crown of the Karmapas.[1] The couple began to anticipate who the ‘great Bodhisattva’ that Dzogchen Rinpoche had predicted might be...
Since he was such an uncommon child, Dzogchen Rinpoche advised Kaltsang Chödän to go into retreat during her pregnancy and to give birth not in the Athub palace but in a cave of Padmasambhava, the Lion’s Sky Castle, which was not far away. Padmasambhava* had practiced there in the 8th century, profoundly blessing the place. Thus, as the birth approached, Kaltsang Chödän and Päldjor Tsewang built a large tent in the flower meadow in front of the holy cave.[2]
(…)
At dusk on July 16th 1924[3] the 16th Gyalwa Karmapa Rangjung Rigpe Dorje was born,* the event being accompanied by numerous auspicious signs typical for the birth of a great master. Rainbows appeared in the blue sky; soft rain showered down, and some saw a rain of flowers; the earth trembled softly and the water in the tent’s offering bowls turned into milk. Neither the pregnancy nor the birth itself had caused the mother any pain. Like many of his previous incarnations, Karmapa walked seven steps in every direction. Proclaiming “Mother, I will not stay,” he announced his fearless character, that of a great Bodhisattva.

[1]          The significance of the Black Crown is explained in the introduction and the corresponding chapter in Vol. II.

[3]           Tibetan biographies of the Kagyü tradition name the full moon day of the sixth month. There are two different Tibetan calendars, which place New Year sometimes a month apart. According to the Tsurphu calendar, which dates back to the second Karmapa Karma Pakśi, this is roughly the 16th of July. According to the Phugpa calendar, used by the Gelukpa school, it would be the 14th of August.