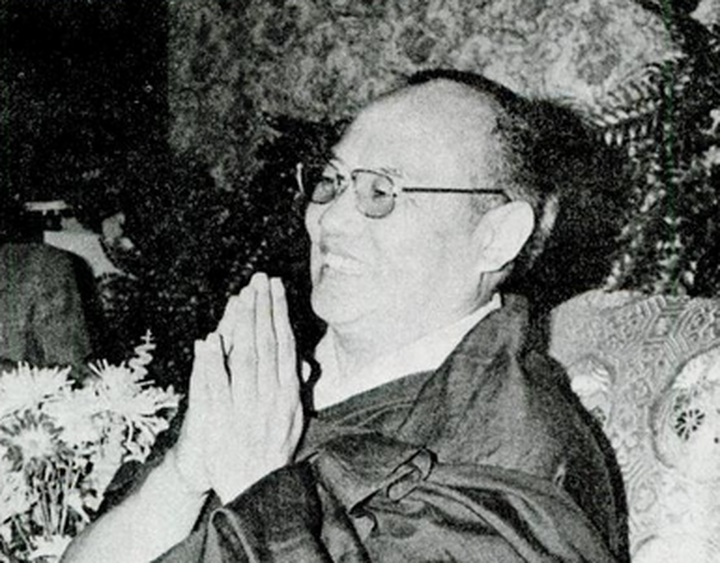 "When His Holiness arrived at the airport, everything changed."
Jeremy Hayward


Following his arrival in the US, Trungpa Rinpoche had step-by-step built up the Vajradhatu organization, which over the years became one of the largest Tibetan Buddhist communities in America. Doing this, “he was careful,” as Diana Mukpo remembers, “not to create a barrier between himself and others. he wanted to experience fully the world he was entering and meet people at eye level. He gave up his robes because he did not want to create an exotic impression where people would indulge their fantasies about him. he wanted to be seen not as a mystery man from Tibet but as a human being.”[1] He did this as Rick Fields explained, with “a poet’s genius for slang, which he turned, with a fine ironic twist, into the language of Dharma. He seemed able to talk to anyone—hippies, scholars, bikers, and children.”[2] By the time of Karmapa’s arrival, as Chogyam Trungpa wrote, “my relationship with my students had become entirely natural and the flow of communication between us was effortless.”[3]
That many of his students were hippies had to be “understood in the context of that time,” explains Lama Tsultrim Allione:
"In 1974 the hippie movement was a big movement. It was an awakening of consciousness and it was the beginning of looking to the East through LSD[4] and the psychedelic ex­perience. It was an opening of consciousness which was very genuine and Trungpa Rinpoche walked into that. He fig­ured it out, how to work with it, how to speak the language of those people and then bring them into the Dharma through him really diving into the culture as it was at that time."[5]
Trungpa brought his students slowly to a point where their practice could become more serious and also leave behind the drugs, which he called “super-samsara.” Kevin Lyons:
"While at Samye Ling in Scotland, Rinpoche gave many of the conventional Vajrayana teachings. America, however, was an entirely different place.
People who went to hear Trungpa Rinpoche speak were for the most part, well-educated and eager to learn, but the counter culture was inundated with so many wild ideas about meditation and spirituality that Trungpa Rinpoche needed a meditation practice that would not create any more confusion and was by its nature, grounding and universal. Although Rinpoche had spoken about the Karmapa a number of times in the past on the whole, we really didn’t know a great deal about him and we certainly didn’t know what to expect.
After all, less than a year before, many of us really began to understand the complexity and vision of the Tibetan Buddhist path. So with the upcoming arrival of the Karmapa, Trungpa Rinpoche was able to share with us his greater vision of the lineage. In many ways the Karmapa’s visit would be a formal introduction into the trappings of the Vajrayana path."[6]
While Trungpa Rinpoche certainly knew how to appropriately welcome the head of his own lineage, his students had not the slightest idea about it. Their questions about whether they “had to vacuum the floor” or “could we just take His Holiness to a disco” reflected clearly the spirit of that time.[7] Their teacher prepared them slowly for the fact that a Dharmaraja—a Dharma King—was about to visit and to implement the teachings of the Buddha on their continent:
"Lecturing to more than a thousand scantily garbed hippies at Naropa that summer gave him pause as to how to present his students to His Holiness. He feared that His Holiness would think that Rinpoche was consorting with barbarians, somewhat like having moved into the zoo with a bunch of jungle animals."[8]
Those hippies, his students, had always made a point of demonstrating that their outer appearance was something superficial. Now Trungpa Rinpoche challenged the nonconformists’ deepest convictions and declared that it was indeed important and that in this case, they would dress in a better way. Lama Tsultrim Allione:
"I remember the meeting when he told the men to wear suits and the women to wear long skirts and long sleeves. Everyone before that had been very relaxed hippies. Wearing suits was the furthest thing anyone would ever do who was around him."[9]
Seonaidh Perks:
"We all had long hair, but we all kind of squeezed in suits. This was very unusual. Trungpa Rinpoche would some­times wear jeans and cowboy shirts and drink Colt 45 beer with us and things like that. We were not used to that whole regular law. At the same time, we had to learn how to bow, how to present the white khata properly, how to open it up, and etiquette came up."[10]
Judith Lief:
"The first thing Trungpa Rinpoche said was that we had to dress better, that we should not present ourselves in a “Hippie-like” fashion. That meant that people should shave their beards. Nobody had much money so we went to the Salvation Army store. Guys got ties and jackets for ten dollars. Women were supposed to wear hose, or skirts and pantyhose, and other such things. It was totally insulting to our whole view of how to dress."[11]
Lama Anila Pema Chodron remembers:
"Sexuality didn’t shock people in those days, drinking didn’t shock people, (but if you asked people to) wear a suit—they thought you’re kidding! Many people left at that point out of protest."[12]
Most stayed, however, and followed Trungpa Rinpoche’s instructions.

From: Radiant Comapssion—The Life of the 16th Gyalwa Karmapa
You can order the book here

Please feel free to share the extract, but give the source and the weblink. Many thanks! © Gerd Bausch 2018.

[4]      The Zen Master D. T. Suzuki warned in this period that LSD had become so popular that even “university professors organize groups of mystical drug takers with the intention (to) seek inner freedom. All this sounds dreamy indeed, yet they are so serious in their intention that Zen people cannot simply ignore their movements.” “Drug guru” Timothy Leary and Richard Alpert (later Ram Dass) adapted and re­wrote the Tibetan book of the Dead for use in their drug experiments.

[6]      Kevin Lyons, op. cit. That does not mean that Trungpa would have neglected the significance of devotion before. See for example, Sadhana of Mahamudra Sourcebook (p. 103).