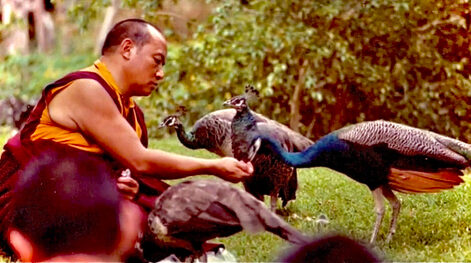 In Brussels
As in other places, so also in Brussels, Karmapa combined his love for animals with his clairvoyance. Hecate Gould Massoubre:
'One time in Brussels His Holiness jumped in the car and said we were going to a bird store. Without knowing the way—he never had been to Brussels—he ended up in front of such a shop. He wanted certain birds and the store owner said: “No, I can’t sell them, I’m showing them in an exhibit tomorrow.” “They will win,” His Holiness replied, “and if they win you will sell them to me.” “OK, come back tomorrow,” the owner agreed. And His Holiness did. The birds had indeed won, and he bought them.'
Shortly after this, Karmapa told his driver Hubert he wanted to find yet another bird. Once more, Karmapa guided the driver with his “inner GPS,” this time to a private house. He rang the doorbell, and when it was opened he told the surprised resident, “The day before yesterday you bought a bird of such and such color. Would you kindly give it to me?”[1]
Completely stunned and overwhelmed by a Tibetan lama visiting him and not only knowing about the bird he had bought, but on top of that with such an incredible presence, he offered Karmapa the bird. It was not the first time this had happened during his travels.
From Radiant Compassion, Vol. 2, p. 72

[Karmapa 1981 was treated in a hospital in Hong Kong and later in the US]
Flight with blind flying passenger
Not only did human beings visit him [in the hospital], again and again a certain bird appeared at his window. One day it flew against the glass and fell two floors. His Holiness asked for the creature to be brought to him. It was injured and required veterinary treatment. Eventually, Karmapa requested that the bird remain in his room during his entire stay and did not even want to be separated from it when he left the hospital, but more about that later.
[…]
On October 19, Karmapa flew to the US via Japan. Everything was difficult; his health worsened during the long flight, and his approaching death appeared to be inevitable. Yet His Holiness remained as compassionate and attentive to his companions as always—and not only towards humans but also animals. He was not prepared to leave the bird that had come to him in the Hong Kong hospital behind, so it went into the airplane in a cage. Dr. McKee explains:
'During the flight, the crew informed us that the bird would be killed on arrival, as birds from Asia are not allowed to enter the US. When Karmapa heard this, he was profoundly shocked. So I took the bird, wrapped it in a napkin and headed for the Boeing 747 toilet. I had an emergency dose of Valium with me, and fortunately, could give the bird a bit of it, so it soon fell asleep. I gave His Holiness the napkin with the sedated bird and he hid it under a bandage from his operation, which had occurred only a week before.'[2]
On landing, the immigration officer surprisingly asked for the bird. Apparently, the flight crew had informed them. Dr. McKee:
'We claimed we had sent it off the plane in Tokyo. The flight crew said they had heard the bird between Tokyo and Seattle. I said that many rinpoches are very skillful in imitating bird calls. Eventually, Immigration, Customs, and Agriculture officials were threatening to “strip search” the Karmapa’s entire retinue of rinpoches and tulkus.
To avoid this, the entourage finally admitted that Karmapa was carrying the bird himself. Dr. McKee tried to mediate: “You have to understand that His Holiness is very fond of birds, and someone had told him that the bird would be killed. He absolutely did not want this to happen!” Karmapa’s compassion visibly touched the officers and they promised not to kill the bird, but to return it to Hong Kong on the next flight. With this promise, His Holiness handed the official the bird. At that very moment, the creature woke up and began to chirp.'
© From Radiant Compassion, Vol. 2, p. 171/174
More about his relation to birds in Steve Roth’s account.
All rights reserved. Please feel free to share the link, posting of the text only with written approval of the author.