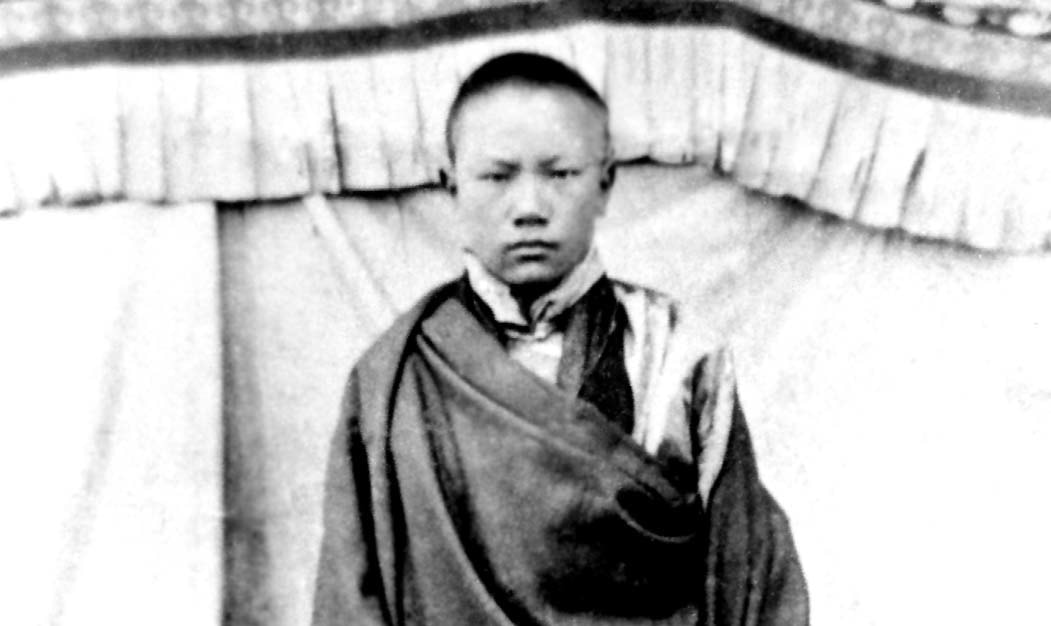 The young Karmapa in the traveling monastery

The Great Encampment of the Karmapa[1]

During Karmapa’s youth in Tibet, traveling on the “Roof of the World” was no easy task. Until the first jeeps appeared in the 1950s, Yishin Norbu journeyed either on horseback or in a palanquin. Like previous Karmapas, he often spent weeks or months traveling in order to perform his dharma activity and visit students throughout the country.
To make good use of this time, he traveled in what was called the Garchen, “the Great Encampment of the Karmapa,” a highly organized community of practitioners who accompanied the Karmapa on his journeys. The 4th Karmapa had established the traveling Garchen, and Khenpo Karthar tells us that the Garchen “was a principal element in the Karmapa’s activity during several lifetimes.” The 4th through the 9th Karmapas spent the major part of their adult lives in the Garchen, accompanied by a moving Dharma community of hundreds or even thousands of followers, who wished to benefit from his continual presence and blessing.
Admission requirements were rigorous. Either one would have completed the preliminary practices (Tib. Ngöndro) or would have recited a substantial number of Mani mantras. All camp members agreed to consecrate the “four sessions” of the day[2] to different aspects of Dharma practice. The Garchen contained separate sections. Each practitioner in the retreat section lived in an individual tent, just large enough to sit in. At its peak, the Garchen contained up to five hundred practitioners who maintained the discipline of a meditation retreat.[3] The art section included thangka painters of the famous Karma Gardri tradition, which took its name from the Garchen. A Shedra (monastic university) and a Tantric College were also included.
Time was well used, even the lunch break. As soon as the meal was completed, the practitioners would recite the Kangyur.* They did this even while traveling. Tulku Urgyen Rinpoche remembers: “As they traveled along, walking in a line across a vast plain, younger monks would distribute separate pages to each of the hundred monks, collecting the pages as they finished. All together they could easily complete all hundred volumes by the time they reached the next mountain range.”
Karmapa and the practitioners traveling with him had a healing effect on the areas they visited. Khenpo Karthar writes that when the Karmapa temporarily camped and gave transmissions somewhere, “He could pacify warfare and bring about great prosperity.” Animals as well as people benefited. During a visit to the West Yishin Norbu described this: “The encampment would be surrounded by animals of all kinds, both predators and prey, who all coexisted peacefully, as if tamed by the energies of the abhiṣekas that were being conducted.”
Consumption of meat and liquor was forbidden in the Garchen. In its heyday during the lifetime of the Seventh Karmapa Chödrak Gyamtso (1454-1505), it became a veritable tent city, accommodating many thousands of people. Five hundred mules carried the camp’s luggage, which included an extensive library. Given its size, the camp was often divided into smaller sections. This was especially needed for passing through poorer nomadic regions, where the local people couldn’t have coped with the entire Garchen’s needs. The Kagyü Mönlam, an annual prayer festival founded by Chödrak Gyamtso, was also held at the Great Encampment.
In the 17th century, Lhasa’s new rulers suspected the camp of collaborating with the King of Tsang, and consequently their allies, Gushri Khan’s Mongol troops, attacked the Garchen. Sadly, many practitioners were slaughtered. As already mentioned, the 10th Karmapa himself fled; according to legend, he flew to Yunnan in the south of today’s China, spending decades in exile. Later Karmapas re-established the camp, and the members continued to increase until in 16th Karmapa’s youth they again numbered about a thousand practitioners.
© From: Gerd Bausch: Radiant Compassion. The Life of the 16th Gyalwa Karmapa, www.edition-karuna.de. Please feel free to share the extract, but give the source. Many thanks!