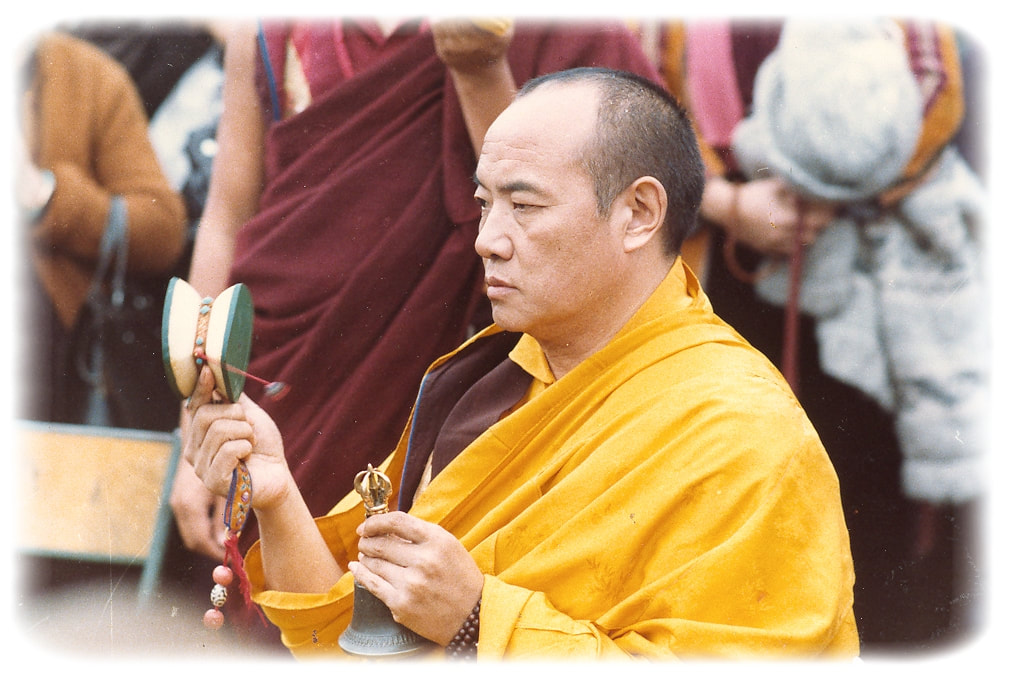 Photo: The 16th Gyalwa Karmapa blessing the Land of Dhagpo Kagyü Ling in 1977

Letter to the Practitioners of Dhagpo Kagyü Ling, France, January 1978.
Dear Dharmafriends
I am writing to you on the eve of my departure from France at the conclusion of my tour in the West during which I have visited many countries.
In the West, there have been many great scientific and technological advances, some of which have brought great benefit. However, these advances cannot bring peace of mind and it is the appreciation of this, which has given rise to a spontaneous interest in the precious teachings of the Buddha Dharma or the true nature of mind. The project to establish Dhagpo Kagyu Ling was conceived out of this spontaneous interest.
In 1975, two great benefactors Mr. and Mrs. Benson, through their faith in the Dharma, offered Land in the Dordogne for a centre. France is an ancient country, rich in history and culture with a tradition of friendship and learning. The Dordogne is a very beautiful part of France, and it is most auspicious that Dhagpo Kagyü Ling should be situated there.
As a result of this and my second visit to the West, I now feel that there is a solid foundation from which the centre can grow.
At present, there are four learned and accomplished Lamas based in the Dordogne, the Venerable Pawo Rinpoche, the Venerable Gendun Rinpoche, the Venerable Khenpo Tsultrim Gyamtso Rinpoche and my representative in Europe, the Venerable Jigme Tsewang. These Lamas are doing much work helping people to understand and practise the teachings.
However, in order to meet the need brought about by the great interest which has been shown in the Buddha Dharma, additional facilities are required, and it is necessary that the centre should be expanded.
Five wishes for Europe
Plans have been drawn up which include the building of 1) a large temple (Tsug lag Khang) where precious images, relics and paintings can be kept, and 2) [a monastery] where the Maha Panditas, meditation Masters, Abbots and Monks will be able to stay.

The plans also include [3] a large lecture hall ; [4] a retreat center (Drub Dra) where the Six Yogas of Naropa can be practised and [5] an accessible Library in which will be housed the ancient manuscripts and scriptures containing the teachings of the Buddha in all their different aspects, and in particular the teachings of the four major schools of Tibetan Buddhism: Nyingmapa, Sakyapa, Kagyudpa, and Gelugpa. [These five points later became known as five wishes of the 16th Gyalwa Karmapa].
Dhagpo Kagyü Ling will be a place where the profound teachings of Lord Buddha Sakyamuni can be studied, understood and practised. The immaculate teachings were propounded for the benefit of all sentient beings. Therefore, I hope that all who are interested will be able to come and and make use of the rare opportunity;
to realize both the relative and absolute happiness.
I believe that, by the omnipresent blessings of the Triple Gem and the Bodhisattvas, whose compassion is as boundless as the sky, the completion of this project will lead countless beings to an understanding of the true nature of mind. Strong foundation have been laid, but great endeavour and financial support are required to enable the seed to crow and bear the fruit.
As I return to my Monastery in the mountains of Sikkim, it is my wish that all who are interested in this important project will be as generous as they can in their help. I pray that all who have received the precious teachings may be able to practice them and that the Buddha Dharma may bring peace and happiness to all sentient beings.

Probably written in Longueil-Sainte-Marie near Compiègne in January 1978 (he wrote another letter to European centres there on 14.1.1978 (see facsimile of the letter (here) and Lama Ole Nydahl:  Über alle Grenzen, p. 123).