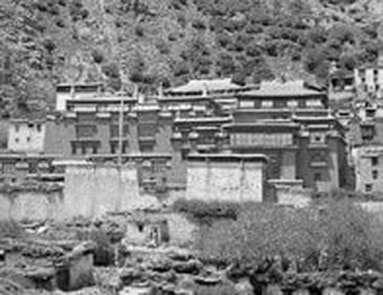 Enthronement and first education in Tsurphu
On his return to Tsurphu in November 1931, the Karmapa was enthroned for the second time. This enthronement was “supervised by Drukchen Mipham Chökyi Wangpo[4] and the eleventh Situ Tulku” in the presence of the previous Gyaltsab and Pawo Rinpoches.
The Karmapa spent his next four childhood years concentrating primarily on his Dharma studies. Bo Gangkar Rinpoche, at that time one of Tibet’s greatest scholars, was his most important teacher. The great potential the Karmapa had brought from former lives revealed itself when he had many visions at this young age. Without having done long retreats, he already perceived the pure lands* and saw the saṃbhogakāya forms of these pure realms that are sometimes – in a religious simplification – called “heavenly realms.” He would tell his teacher which Buddha, Yidam* or Dharma protector* he saw in front of him and what prophecy or advice they gave him. He also recounted some of his former lives. Although his tutor recorded all this information, these records were sadly lost when Tsurphu monastery was destroyed during the ‘Cultural Revolution’ in the 1960s.
Karmapa was a curious and sometimes playful pupil, while Gangkar was a severe teacher who thought it appropriate to correct him at times. Although in those years corporal punishment was unfortunately quite common in Tibet, beating a high incarnate lama was a delicate affair. Before administering the punishment, Gangkar would close the door, prostrate three times and only then discipline the young boy. This treatment was not at all well-received by one of Rigpe Dorje’s relatives, who protested: “You treat the Karmapa, an incarnate Buddha, like an ordinary person. Your behaviour is criminal!” The family made Gangkar leave even though the Karmapa himself did not seem to suffer greatly from his behavior. He merely commented: “Yes, he does occasionally pinch and strike me but he does so out of a good heart. He only wants me to advance in my studies.”[5]
His next teacher, Samten Gyatso, was a highly realized practitioner who had already taught the 15th Karmapa, Khakhyab Dorje[6]. He found a smarter solution to helping this great master study with more discipline. Instead of punishing the Karmapa when he was inattentive or did not want to learn, he threatened to discipline the Karmapa’s servants. This always elicited the desired effect. Karmapa could not bear for his servants to suffer, and so he immediately stopped playing around and devoted himself to his studies.[7]

[4]The successive Drukchen (Gyalwang Drukpa) are the heads of the Drukpa Kagyü lineage.

[5]This story does not aim to trivialize such authoritarian methods of education, which were sadly quite common in old Tibet, but rather serves as to show how the young Karmapa considered the suffering of others above his own welfare.

[6]The 15th Karmapa praised Gyatso as follows: “In these times perhaps only Samten Gyatso has totally perfect realization of the innermost essence of Dzogchen.” Tulku Urgyen Rinpoche, Erik Pema Kunzang (transl.): As It Is, Vol. 1, Rangjung Yeshe 1999, p. 11.


[7]The entire section concerning Karmapa’s teachers is based on Tulku Urgyen Rinpoche: Blazing Splendor, op. cit., p. 188-190, even though Tulku Urgyen does not give the teacher’s name.